Prior to this fiesta my co-workers asked me if we had fiestas in the United States. I said ‘of course!’ Casiguran is a small municipality, so I talked about my small hometown. Our Grape Harvest Festival we used to have in Washingtonville, and the Cheese Festival in Monroe. I talked about the food, the music, and the dancing. How my family and I would walk through the winery or down the streets of Monroe. My sisters and friends would play games, go in bounce houses, and look through the vendors. We would eat good food, and always take home a jar of fresh pickles (my favorite). But as I sat packed into the Casiguran Gymnasium on day one of five celebrating Casiguran’s Patron Saint, I decided that a Pinoy Town Fiesta is like nothing I have ever seen before. 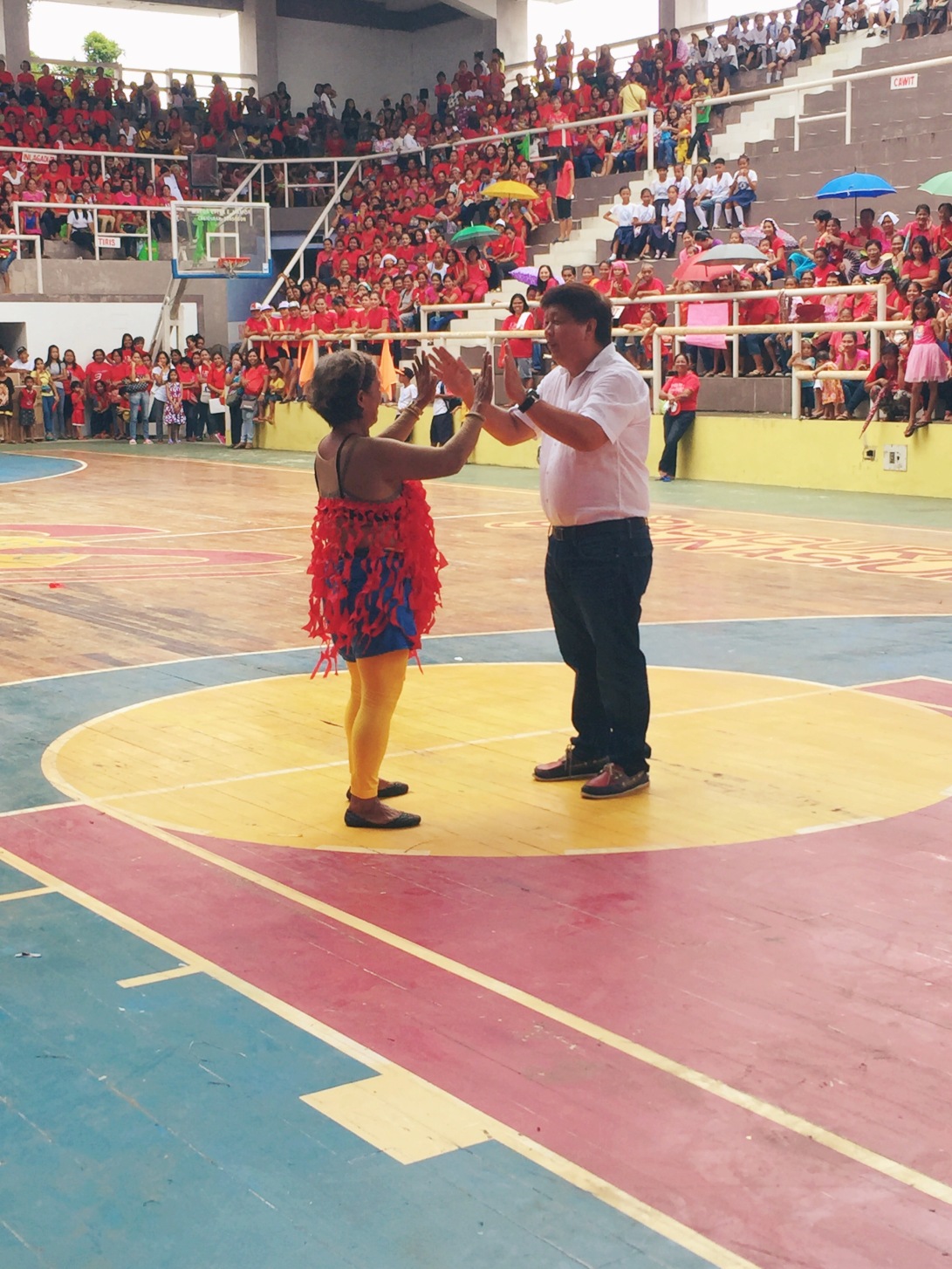 The Mayor stood in front of his adoring audience and entertained his community. He’s been described to me as a ‘jolly man’, which sounds odd to my American ears because the only person I’ve heard called ‘jolly’ in my entire life is Santa Claus. Yet, I can’t help but agree with them, he is jolly. As the jolly mayor finished up his playful opening remarks, the first barangay was ready to begin their performance. These performances are a culmination of a dancing, marching, flag twirling, and baton throwing; typically performed by young girls in elementary school or high school. However in this case, the only woman under the age of 40 was the young girl standing in the very front. The Town Fiesta in Casiguran has a tradition of having the older women of the community perform instead of the younger generation. The girl in front had been given the task of teaching and leading the women behind her in the routine they were about to perform.

As I watched them march forward they paused for a second before starting their number. All of them dressed to match one another except for the young girl in front. Her fancy costume had a bodice, skirt, and headpiece that were covered in golden sequins and she wore long heeled boots. As the band behind her began to play I watched as she mouthed the words; ‘five, six, seven, eight.’ I smiled to myself because I have repeated those four words throughout my life so many times I can’t even begin to count.

5, 6, 7, 8 and I remembered the tickle that would rise through my stomach when walking on stage in my little tutu and pink tights. I remembered how the hairspray would gather my hair into stiff little rows that were pulled together into a bun. I remembered how many scars I probably still have on my scalp from sharp bobby pins being pushed into my pile of hair and hitting my head.  I remembered how many pictures I have at home of me and my cousins dressed up in our dance costumes.  I smile at the thought of a little version of myself in bright red lipstick and a red and orange costume eager to go on stage.  I really appreciate how my experiences here have had a way of renewing memories I had all but forgotten about.  I turned my attention back to the gymnasium floor and watched as their performance came to life while I quietly kept count in my head.

These performances were not taken seriously whatsoever, and that was part of the beauty. The Ates, Nanays, and Lolas, in front of me had an absolute ball.  They marched, and danced with huge smiles on their faces. They twirled their flags and batons, and laughed as they dropped those flags and batons. They shook their hips in their short skirts and long socks, and the crowd went wild. The mayor would call aside the more animated dancers at the end and hand out P 1000 bills. The fun energy radiated throughout the municipality and got everyone excited for the next couple days.

If you plan on visiting me, which I hope you all are, make sure to do so during a fiesta. Fiestas here are a special outward extension of the sentiment held by the people who live here. It’s like a shortcut in which you get to experience, not only, the food, the history, and the culture of the Philippines, but also the fun-loving and jolly spirit of the Pinoy people. I will get to attend many fiestas here in the Philippines, and I hope you join me!